In 1795 Haydn returned from his spectacularly successful visits to England to the relatively light duties prescribed by the new Esterházy Prince Nikolaus II.  Nikolaus had abandoned his father’s palace at Esterházy, sacking its extensive musical establishment, and divided his time between Eisenstadt and Vienna.  Haydn was kept on, but his main duty was just to write a Mass for the Princess’s name day. He was free to accept other commissions.

One such commission came from Count Joseph Erdödy, the Hungarian Court Chancellor.   Although Erdödy’s father had employed an orchestra to play in their family’s three palaces, the son, on inheriting the title in 1789 responded both to contemporary taste and financial stringency by replacing the orchestra with a string quartet.  In 1796 he placed a generous commission with Haydn for six quartets.   The resulting ‘Erdödy’ quartets are a triumph, perhaps the pinnacle of Haydn’s long, quartet-writing career.

The fourth of the set, nicknamed ‘The Sunrise’, dawns gently in a simple B♭ chord from the three lower strings. The first violin’s theme cautiously rises, with no suggestion of the movement’s Allegro con spirito marking.  After 20-odd bars light floods in, somewhat reminiscent of the opening of ‘The Creation’ on which Haydn was working at the time, and the spirit is freed in dancing semiquavers.  The opening chord returns in F but now with the theme in the cello curving down, rather than rising.  The movement develops the contrast between these ideas.

The Adagio is one of Haydn’s most profound.

Its pausing, hesitantly rising opening recalls, in slow-motion, the start of the first movement.  The first violin’s rapt meditation is intensified by closely overlapping entries of this opening phrase.  The Menuetto is rustic rather than courtly, and its lines again recall the gentle rise of the opening sunrise.  The Trio is linked through from the Menuetto by a held chord on the cello and viola, again recalling the work’s opening.

The last movement’s structure starts with alternating major-minor episodes, but after the reprise of the major section Haydn puts his foot on the accelerator: Più allegro,  Più presto –  an exhilarating race to the finish.

Thomas Adès takes notes seriously.  For him they are magnetic: “the two notes in an interval… have a magnetic relationship of attraction or repulsion which creates movement in one direction or another” (in conversation with Tom Service).  The composer has to find where the notes want to go, exploring their inherent instability.  Adès admires composers who respect their material in this way: Beethoven, Haydn, Janáček, Sibelius.

And it is worth taking the “prodigously talented” (NYTimes) Adès seriously –  as an academic (double starred first from King’s College, Cambridge), pianist (second in Young Musician of the Year and internationally renowned performer), percussionist and of course composer.  Operas and a wide variety of other vocal, orchestral and chamber music have established him as perhaps the best known British composer of his generation. 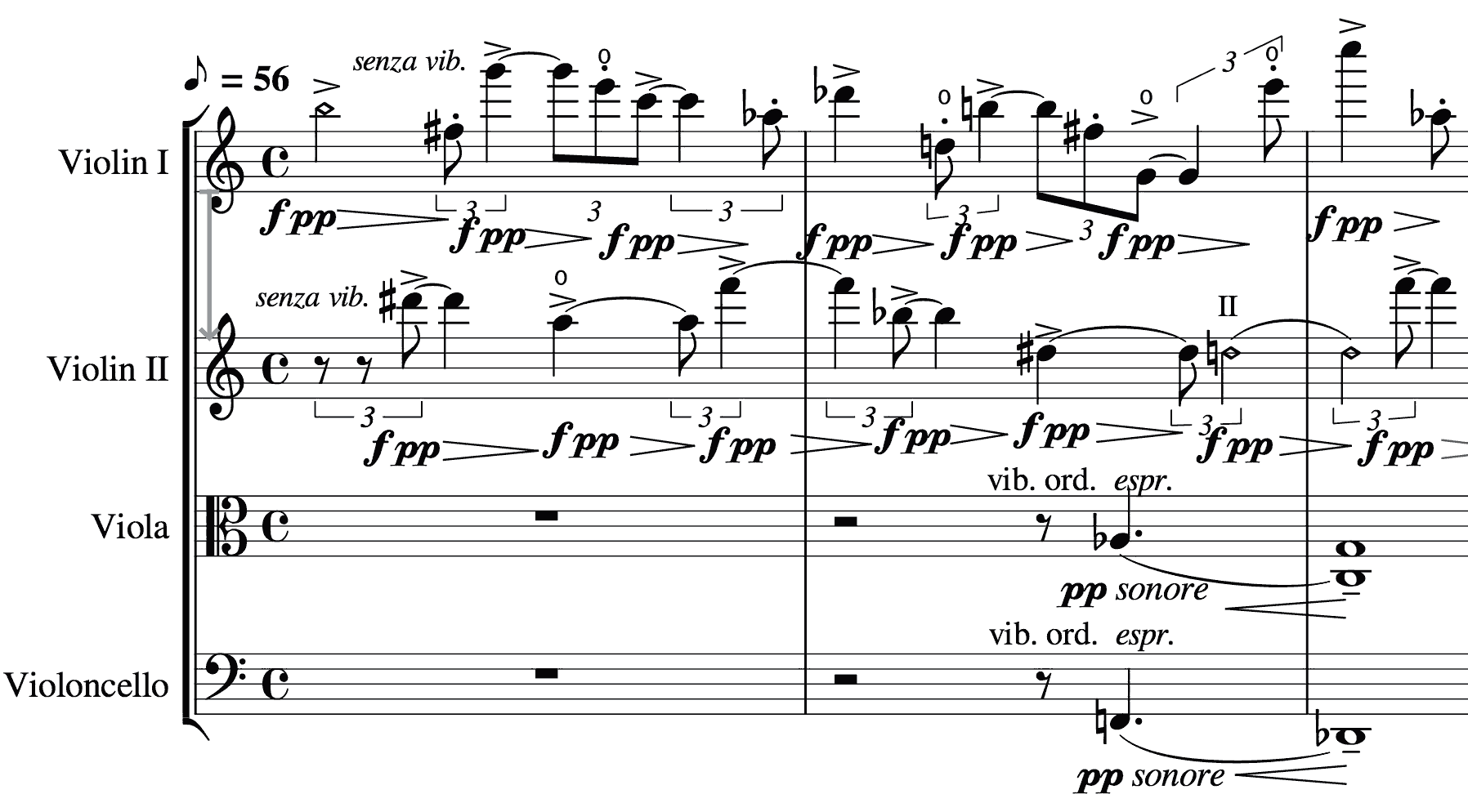 et.  The first quarter, Nightfalls, opens with a texture popular with Adès – very high combined with very low.  The two violins alternately scintillate like twinkling stars while the viola and cello growl like the body of the earth settling down for the night (illustrated):  two separate worlds together. A slow violin melody builds through organ-like chords to a climax which then fades back to the scintillating world of the opening.  The second movement’s ‘Morning Dew’ scintillates in a different way with technically demanding pizzicato in continually changing, arithmetically daunting time signatures.

Like the Scherzo of the Beethoven quartet later in today’s concert,  ‘Days‘

opens with a simple, repeated rhythm (lasting 13 quavers) on a single note (illustrated x).  Adès complicates things by writing the rhythm across bars of changing time signature.  The second violin persists with the rhythm against growing harmonies from the other instruments until first the viola takes it over and then the whole quartet shouts the rhythm fortissimo, before dying down, but with that rhythm still persisting.

The final movement ‘The Twenty-Fifth hour‘

has a fiendishly complex, eponymous time signature – 25 semiquavers to a bar (8+3+8+6) – which Adès asks to be played ‘very sweetly, like a march and dancingly, like a song’.  Fortunately, we listeners are largely unaware of the dense technical problems facing the performers:  Adès’ music engages with fascinating and often beautiful sounds. To paraphrase a remark attributed to quantum mechanic Richard Feynmann “If you think you understand Tom Adès, you don’t understand Tom Adès.” The end of the movement returns to the sound world of the work’s opening, resolving all the previous complexities to a simple D major chord combining  three very low with two very high notes.

The Razumovsky quartets were a revolution in quartet writing. ‘Oh they are not for you, but for a later age’ Beethoven told an Italian violinist who found them incomprehensible.   In Joseph Kerman’s words ‘It is probably not too much to say that Op. 59 doomed the amateur string quartet.’   The conversation between equal players of Haydn, Mozart and even Beethoven in his earlier Op 18 quartets here gives way to ‘the heroic discourse of the symphony’ – and no ordinary symphony at that:  the Op 59 quartets were written shortly after the third, Eroica Symphony.

The commission for them was from Count Andreas Razumovsky, the Russian ambassador to Vienna.  His father had risen from humble origins, thanks in part to his fine singing voice, to be one of Catherine the Great’s favourite lovers.  Elevation to the nobility and to the rank of Field Marshall followed, together with a vast estate and aristocratic wife to match.  There is nothing like music to lubricate social mobility!  Son Andreas trained on a British warship for the Imperial Navy before joining the diplomatic service.   As well as being vastly wealthy, thanks to his father’s vocal and amatory virtuosity, he was also a very able second violinist in his own quartet.  The first fiddle was Ignaz Schuppanzigh – friend, inspiration and perhaps also violin teacher to Beethoven.  As well as playing with the Count, Schuppanzigh had formed his own professional quartet in 1804 in order to give public quartet concerts – a radical new departure.  This accomplished quartet may have encouraged Beethoven to stretch his technical demands on the players to match his more ambitious musical conceptions.  Schuppanzigh’s quartet certainly took Beethoven’s new works seriously, learning from bitter experience that all his new works were challenging.

The premier of the three Razumovsky quartets, or ‘violin quartets’ as Beethoven described them to his publisher, was respectfully received in the press: ‘deep in thought and well worked out, but not generally comprehensible’.  Three months later however we hear that the same quartets ‘have become more and more popular’.  It would be rare for contemporary audiences now to accommodate so rapidly to new works.  Although the audiences were not large, they did consist of ‘very zealous and attentive music lovers’.  As, of course, now.

The F major quartet lasts an unprecedented 40 minutes, sharing the expansive length of the Eroica Symphony.  Even more remarkably, Beethoven’s notebooks show that he originally intended, as is usual, to repeat the initial, exposition part of the first movement.  He then decided to forgo the repeat, fooling us with 4 bars that are indeed identical to the opening but then swerving away. He also had plans to repeat the second part of the first movement and indeed a substantial part of the Scherzo and a small part of the Finale.

(illustrated) makes you wish you were a cellist (even just an amateur one) as it gradually unfolds over harmonically almost static repeated quavers.  The theme contains two elements (labelled x & y) that inspire several later developments, such as the y-based theme

with the two violins in thirds
(illustrated).  The exposition’s richness – smooth leisurely themes contrasting with lively and wide-ranging triplets and arpeggios – is matched by a wonderful long development at the end of which the first violin triplets up piano to a top Bb, then B, then C heralding the return of the F major first theme, but then Beethoven side-steps into another theme and swerves through some unexpected keys before finally allowing the recapitulation to start.

In contrast to the lyrical richness of the first movement, the second, Scherzo movement

starts as pure rhythm, piano on the cello (illustrated), with a lively fragmentary answer from the second violin.  Not much to go on, but enough for Beethoven to provide us with a remarkably long and witty bout of musical ball-tossing.  The slow movement – very slow and sad – uses the high register of the cello with keening poignancy and ends with a piano cadenza from the first violin whose final trill leads us into the “Russian theme” (perhaps at the request of Razumovsky) of the finale.  Energetic and emotionally more straightforward, the movement presses on relentlessly, only briefly pausing to reflect in a dying-away Adagio, before racing the last 9 bars to the finish.

Attenborough Centre for the Creative Arts