At the age of eight, Schubert started to learn the violin from his father; six years later he was composing for the family string quartet: brothers Ignaz and Ferdinand on violin, Franz on viola and his father on cello. However, the eleven or so string quartets that Schubert wrote between the ages of 14 and 20 together with other early chamber music such as today’s Sonatensatz Piano Trio are now rarely played.

In July 1812 Schubert’s voice was breaking; on the 26th he records in the score of a mass he had just sung with Vienna’s Imperial Chapel Choir: ‘Schubert, Franz crowed for the last time’. The next day he started work on this Trio under the tutelage of Mozart’s ex-colleague Antonio Salieri. If it was intended to be the start of a full-scale work, other movements do not survive.

This single movement Allegro ‘Sonate’ has undoubted charm and it is both intriguing and frustrating to catch a glimpse of how the older Schubert might have developed some of its ideas, while his younger self dashes off to the next nugget. The very opening is a case in point. After three ‘stop talking and listen’ chords, the cello holds a high F before being joined by the violin in an exquisite, simply accompanied 4-bar phrase which you ache to have extended. A foretaste of Schubert’s genius for accompanying figures comes a little later with a pianissimo staccato quaver figure in the piano that grabs your attention before the violin sings a variant of its opening phrase. The movement lasts a little under 10 minutes.

1808 saw Beethoven composing at full power: his Fifth and Sixth Symphonies, the Choral Fantasia, the A major cello sonata as well as the two Op 70 piano trios all come from this year. The cello sonata and the piano trios seem to have been part of a conscious decision by him to revisit the chamber music forms with which he had made such an impact shortly after his arrival in Vienna.

The two Op 70 piano trios are of very different worlds – both represented in Beethoven’s mid-1808 sketchbook: the first trio (nicknamed the Ghost) inhabits the violent and supernatural world of a proposed opera on Macbeth (the Ghost being Banquo’s), the second the warm humanity of the Pastoral Symphony. Both trios are dedicated to the Hungarian Anna Maria, Countess Erdődy. She was one of Beethoven’s longest-lasting friends, a faithful promoter of his music and an initiator of the legal contract that gave him an annual income. Her numerous exchanges of letters with Beethoven shared deep philosophical ponderings together with mutual grumblings about their respective ill-health. A proper friend!

As often in middle Beethoven, the introduction searches for the right key: the cello proposes C minor with a little U-shaped phrase, the violin F minor, the piano Bb major before we land on the home key of Eb and a short piano cadenza leads us into the main Allegro. Soon the cello

declaims a sing-it-from-the-rooftops inverted U-shaped theme (illustrated) while the piano exuberantly hammers the accompaniment. But, not one to waste good material, Beethoven springs a surprise by unexpectedly bringing back the slow introductory motif in the new tempo as a bridge into another group of cheerful tunes.

The two middle movements are perhaps unique in Beethoven’s chamber music in both being Allegrettos. The first Allegretto is also unusual in consisting of variations on two contrasting dance themes, both with a Hungarian flavour: the first poised and in the major, the second coarser and in the minor. The second Allegretto (ma non troppo) movement is perhaps the most affectionate of the whole work: an ardently romantic song

(illustrated) is reiterated over and over again within an extended minuet and trio structure, never palling in its charm.

All three players get a chance to show off in the tirelessly exuberant last movement, which was inspired, according to Carl Czerny, by a galloping horse. The horse must keep on galloping according to Beethoven’s instructions to his publishers: ‘If there is anywhere a ritardando then remove it … – there should be no ritardando in the whole movement’.

Acknowledgment: My debt to Angus Watson’s excellent book ‘Beethoven’s Chamber Music in Context‘ will be obvious if you read it.

Although written only 7 years after the ‘Sonatensatz’ trio that we heard before the Interval, the exuberant ‘Trout’ quintet of 1819 is the work of a master. Together with the ‘Quartettsatz’ written in 1820 it sets the scene for the great chamber works of his later years: in 1824 the Octet, the A minor “Rosamunde” quartet and the D minor ‘Death and the Maiden’; in 1826 the G major quartet; in 1827 his two piano trios; and in his last year, 1828, the incomparable C major two-cello quintet.

The 22-year old Schubert’s cellist friend Sylvester Paumgartner commissioned the ‘Trout’ quintet while Schubert was visiting his home town of Steyr in Upper Austria. Paumgartner asked Schubert to include material from his 1817 song ‘Die Forelle’. 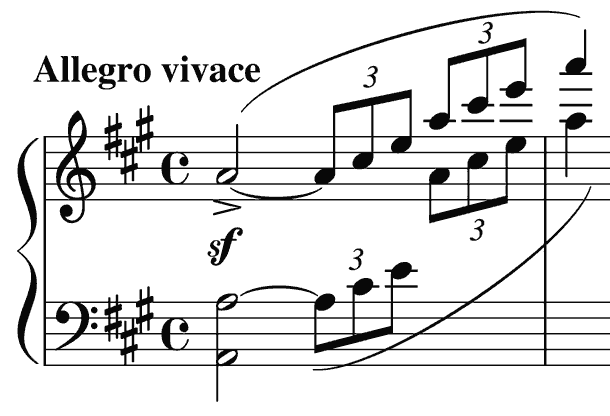 As their mutual friend Albert Stadler, later wrote: ‘[it was] the particular request of my friend Sylvester Paumgartner, who was quite taken with the delicate little song. The Quintet, according to his wish, was to adopt the structure and instrumentation of Hummel’s Quintet,

originally Septet, which was then still new.‘ Paumgartner had invited friends round to play this Hummel quintet, an arrangement, probably by Hummel himself, of the Op 74 Septet of 1816. The Allegro vivace opening flourish of the Trout quintet (illustrated) has a clear resemblance to the triplet arpeggio at the start of the Hummel quintet’s Allegro second movement (illustrated). These arpeggios are major motifs of both works.

The rather curious instrumentation of the Trout quintet – adding a double-bass to the conventional piano quartet’s violin, viola and cello – had been used by Hummel back in 1802 for an original piano quintet as well as for the later septet arrangement that brought together Paumgartner’s friends and spawned the Trout. The addition of the double-bass raises all sorts of possibilities for Schubert particularly in the well-known fourth movement with its variations on the ‘Die Forelle‘ theme. It allows him for example to liberate the piano from providing the deep bass, and (in the third variation) send it off on brilliant high octave passage work while the cello and bass, also in octaves, growl the theme. They stay together for the fourth variation doing unexpectedly nimble fortissimo triplets, even finishing with that A-major triplet arpeggio that the piano flourished right at the work’s opening. Happily,

a related arpeggio that starts the piano accompaniment to ‘Die Forelle’ (illustrated), leaps into action in the final variation. The success of a movement consisting of variations on one of his songs may have encouraged Schubert to repeat the recipe 5 years later in the “Death and the Maiden” string quartet.

See Chris Darwin’s Programme Notes for other works on his web page.