This is the fourth in our series of newsletters focusing on individual pieces of chamber music, chosen by members of the Strings Attached team. This time Chris Darwin, the author of our acclaimed programme notes, explores a special interest of his by writing about a neglected master of the late 19th and early 20th century. 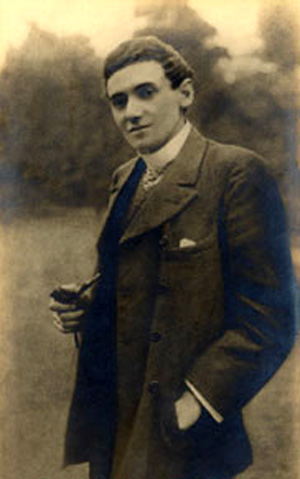 I would like to introduce you to William Martin Yeates Hurlstone.  Although Hurlstone’s Piano Trio and Piano Quartet are two pieces that I enjoy playing more than many other works, he is not one of the 80 or more composers that I have, over the years, ever been asked to write programme notes for.  He is almost never heard in chamber concerts, or indeed, since most of his output was chamber music, anywhere.  Wind players may have performed his G minor Trio for Clarinet, Bassoon and Piano,  the clarinet also has the Characteristic Pieces for Clarinet and Piano and the bassoon a Sonata, but that is about it.  Yet his teacher, Stanford, rated his talent above any of his other pupils including Ralph Vaughan Williams, Gustav Holst, Frank Bridge & John Ireland.

Why this neglect?  One reason is that his output was quite small: he died in 1906 aged 30 of long-standing bronchial asthma exacerbated by waiting too long on Victoria Station for a train home to Battersea.  Unlike, say, Frank Bridge he never had the chance to develop his own distinctive post-war voice.  Hurlstone’s music is very much of its time and place:  post-Brahms and English.  But in these difficult COVID-constrained times, you might find that a comforting combination.  His definitely pre-war, but individual, voice has a wonderful melodic gift, he has rhythmic wit and handles complex musical forms such as fugues with a masterfully light touch.  You can read about his initially comfortable (grandson of a president of the Royal Society of British Arts, son of a surgeon) but subsequently bumpier life (asthma prevented a career as a concert pianist) in a wikipedia article  or at greater length here . Scroll down until you get to Hurlstone’s Biography.

Prior to starting at the Royal College of Music aged 18, Hurlstone had had a number of compositions published despite never having been taught composition. One of the forms that he composed in was the Melodrama – a dramatic recitation of a poem or text accompanied by violin and piano – a sort of Edwardian rap.   Unfortunately none of his Melodramas is easily available, so perhaps I will make a visit to the RCM Library once we are allowed such inessential trips.  Hurlstone had a particular affection for wind instruments and organised concert series in Croydon devoted to works, many of them new, for a variety of wind ensembles.  He especially promoted the work of English composers, so it was apt that his own career was significantly boosted in 1905 by his String Quartet winning the Cobbett Prize (beating Frank Bridge). The following year he was  appointed Professor of Counterpoint at his old college the RCM – one of the youngest such appointees ever.  But, as we have seen, he died later that year.

Doubtless you are now itching to hear some Hurlstone.  YouTube unfortunately only has a single movement of the Trio and none of the Quartet so I have put on my web page the individual movements of these works played by the Dussek Trio with James Boyd; you can access them here.  The luscious slow (second) movement of the Trio (which he completed in September 1901 aged 25), is not a bad place to start.  It shows off his fine melodic gift.  The other movements also show his rhythmic inventiveness (perhaps following Brahms) and secure dramatic sense.  Happy listening.

Do you listen to or watch musical performances online? We are indebted to John Alderson for bringing to our attention this list of ten useful sources of string music published by The Strad . They include streaming from The Wigmore Hall, ‘Chamber Tuesdays’ from the London Mozart Players and, if you feel like travelling, highlights from the Gstaad Menuhin Festival.

Thanks too to Andy Agathangelou for mentioning verbierfestival.com . Instead of the festival it is providing music ‘at home’ starting with the fabulous Quatuor Ebène; and to Betty Skolnick for mentioning the performances from the Royal College of Music on YouTube. You can find them on www.rcm.ac.uk/events or go straight to YouTube and type RCM into the search box.

Another useful website is at www.bachtrack.com . It’s not just about Bach; in fact it describes itself as “The Classical Music website”. There are plenty of articles about music and concerts are streamed live – meaning that you have to listen at the time they stream the concert.

Attenborough Centre for the Creative Arts