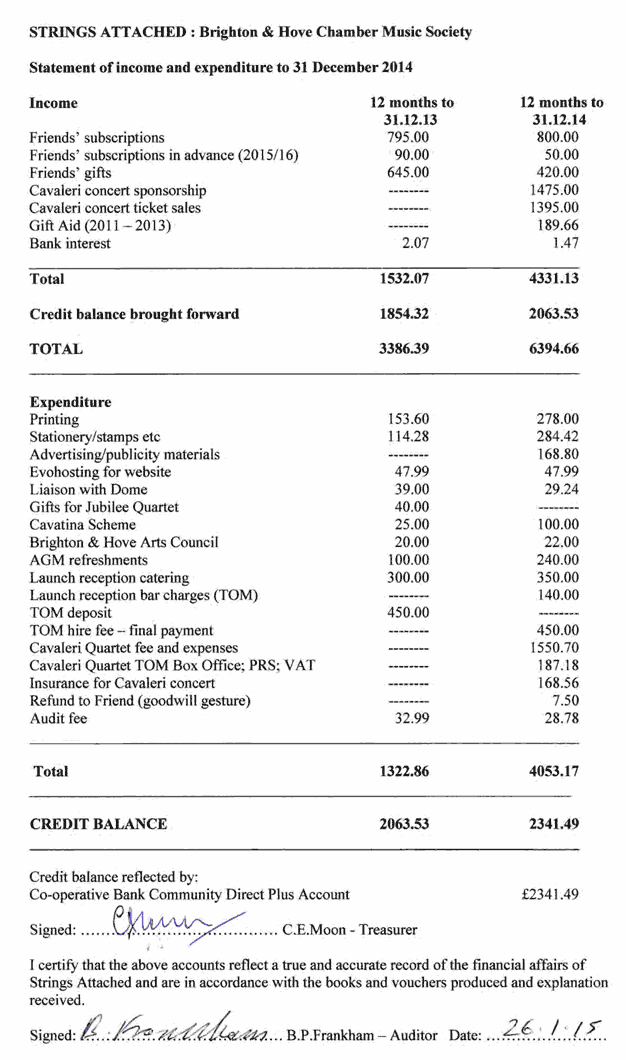 Report of the Committee for 2013

Report of the Committee for 2013

END_OF_DOCUMENT_TOKEN_TO_BE_REPLACED

Report of the Committee for 2012

This annual report is the second from Strings Attached and summarises our activity during 2012.

2012 was the first year in which we were able to seek feedback from members about the Coffee Concerts run by the Brighton Dome and Festival. We did this by means of a questionnaire survey and an open discussion session at the Annual General Meeting in February. Our aim, in so doing, has been to develop and maintain a productive dialogue with Andrew Comben, Director of the Brighton Dome and Festival, and his team, with a view to ensuring that the Coffee Concert Series builds on the excellent start made in 2011 and becomes a secure part of the Brighton and Hove concert calendar. Strings Attached seeks to help with this by ensuring it has a supportive audience who appreciate the concerts, feel that their opinion is valued, and thus continue to come.

The Survey and annual general meeting discussion covered a number of key issues which we have subsequently taken up with Andrew and his team. They are:

This represents a considerable achievement in terms of representing the interests of our members and has been brought about as a result of a continuing and strengthening relationship with the Brighton Dome and Festival team. Andrew Comben’s personal role in leading the team is vital and we are very fortunate that he is a lover of chamber music. Happily now there are others in the team who take great care to ensure that everything from the printed programmes to the practical arrangements on the day work well. We are consulted about arrangements for each concert before it takes place which helps enormously. We value this relationship greatly and appreciate the efforts of the Brighton Dome and Festival staff to build this productive relationship.

The Strings Attached annual launch concert for the coffee concert season 2012 – 2013 was given by the Castalian Quartet, a young quartet mentored by Levon Chilingirian, our president. We would like to continue the ‘launch concert and reception’ tradition as it provides a good start for the season and gives concert goers an opportunity to join Strings Attached just before the new season begins.

Our website has continued to develop strongly during 2012 including details and programme notes for the coffee concerts (as well as excellent and thoughtful reviews by Andrew Polmear and Richard Amey), a hyperlinked calendar of chamber music events and a register of local musicians seeking others with whom to work. We owe special thanks to Chris Darwin who has continued to support Strings Attached both by producing excellent programme notes for every concert and also maintaining the Calendar, Music Providers and Local Players pages on the website, and to David Botibol for maintaining the whole Strings Attached website.

In addition to our central role in relation to the Coffee Concerts we have also been giving thought to our wider role. The committee has decided that we would like, on occasions, to support performances which would not otherwise take place – perhaps because the performers or repertoire are a little less well known. We cannot afford to do this often and our plans in this respect remain at an early stage, but we would be very interested to hear from members with ideas about this.